The region between scorpius and ophiuchus is one of the most colorful ones in the Northern Hemisphere's Summer night sky. The bright yellow star in the picture is the red supergiant Antares with its reflection nebula. Next to it is a globular cluster known as the M4. The blue star on Antares's 7 o'clock is the tau scorpii and the star on M4's 1 o'clock is the sigma Scorpii. The red emission nebula around these two stars lit the entire lower right corner of this picture.

This region gets its name from the multiple star system called the rho Ophiuchi which is located a little North to the "pentagram" of stars here. You can distinctly see the two blue subgiants rho Ophiuchi A and rho Ophiuchi B here embedded in its own (bluish) reflection nebula.

Near the top of this image is another reflection nebula IC4601 (quite faint in this image) which is illuminated by the intense radiation of three blue giants, two of which are part of a binary star system catalogued as HD147013 (visible here). This reflection nebula is part of the larger interstellar cloud of dust and gas known as the blue horsehead nebula (IC 4592). This is one of the areas where new stars in our galaxy are formed and born.

Another very prominent feature of this region is the murky meandering of the dark river B44 which inspires the title of this image. The river's dark appearance is caused by dust obscuring background starlight. And of course due to the proximity of this area to the milky way, you can see a little bit of it at the lower left corner of this image. 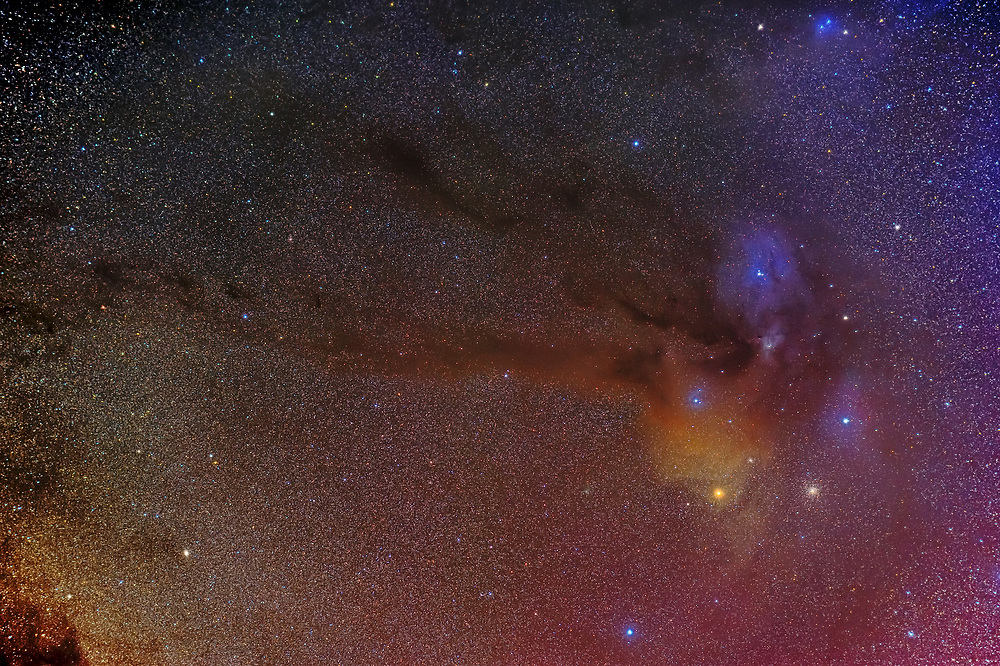